loading
Swtor Corellia’s Most Wanted achievement can be completed by both Empire and Republic. You can find this achievement in Legacy section, under Achievements – Corellia – General. There are eight opponents you need to defeat in order to acquire this achievement and 5 achievement points. 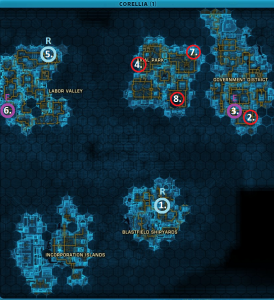 Their names and locations are the following:

Back to Swtor Planet Elite or Champion Hunt Guide.