loading
This guide focuses on knowing your stats and how they relate to the character class choice you make in SWTOR at a Basic to Moderate MMO gamer experience level.

From what we have seen of the Beta of SWTOR so far it is obvious that it is a standard MMO stat/gear dependent system that determines how effective your character will be against the content of the game whether it be PVP or PVE content. Your characters success is driven by your statistics and your gear and gear bonuses.

The way the system is designed should be no surprise to the experienced MMO gamer. There is a basic pattern that you see across the board on each character type that you could choose. There are Primary and Secondary stats that relate to your character and for each class choice there are different stats that apply in order of importance to how they affect what you can do.

Depending on which class you choose will determine which set of stats are most useful for you and which are not. Some of these stats will come from your character and the leveling process and then the majority of the specialized boosts to stats you choose for your character type will come from your gear. The Gear bonuses will not be as prevalent at the first fifteen or so levels but around twenty and up you will see a more dramatic dependency on bonuses from gear.

*Note: In addition to this there are also three other ways in which your character is measured that don’t directly affect your damage output or health ratings, but are used for other game mechanics like attaining PVP gear, Light and Darkside gear and Social gear among other things. We wont go into too much detail with these for now because I have other guides for these for another day. Those other ways the game uses to gauge your character in different areas of content are as follows.

Valor– which is a measurement of your success and effectiveness in PVP.
Social points– that are earned for participating in conversations in group content like flashpoints or any group content where a conversation roll is made.
Alignment points for Light and Darkside choices– earned in quest responses or as mission rewards. It is a reflection of your path or decisions throughout the story of the game.

Now lets get into the meat of this guide dealing with the stats and their order of importance to the character choice you are going to make. This will be very important to you later when it comes to skill point distribution and when using tools like our handy skill tree calculator also and when it comes to selecting gear with bonuses that mesh well with your most important stats. The gear/stat choice will become ever more important as you level as bonuses from gear is the main way in which most of your effectiveness will come into play.

Of course there are always going to be off the wall builds or flavor of the month builds that focus on some obscure stat relative to a class to achieve a certain effect in game. The following are the normal choices though based on the way Bioware seems to have designed it to work that will be most effective for the majority of players using whats commonly referred to as a “cookie cutter” type build.

(All this information was based off of beta play experience so it is subject to change later after release as massive skill changes have been seen from build to build of the game at this point while they tweak their systems.) 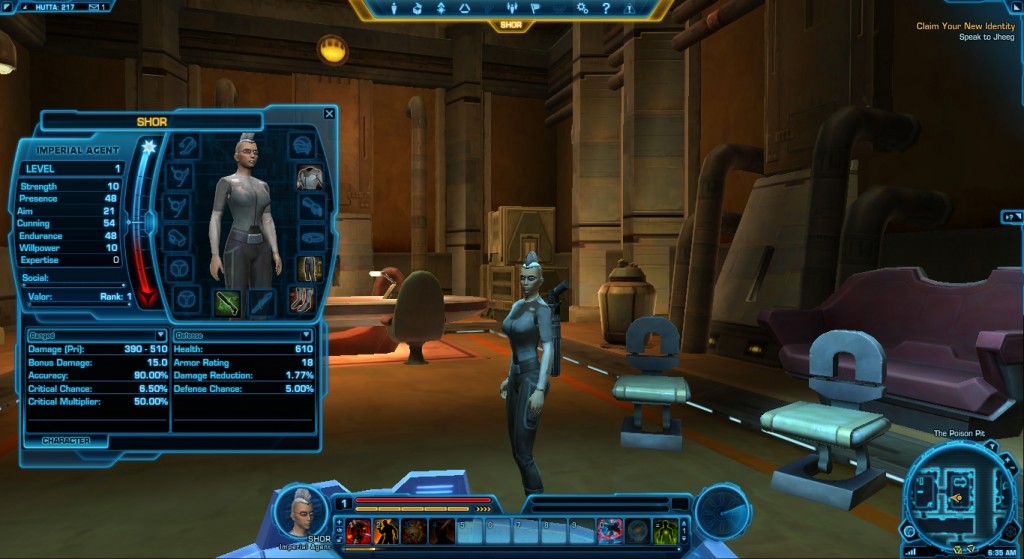 Aim, Cunning, Strength and Willpower are specific to certain classes the way they have designed the system. Endurance while I consider it to be a primary stat, is not really tied to a specific class. It is sort of a extra primary stat that can help any of the classes but one that no class really focuses on more than the other primary stats.

How do the primary statistics relate to individual class choice?

Generally this list holds true until you get to the point that you are picking your advanced class and trying to move your character into a specialized type of play-style and then you might want to consider another of the primary stats your main, like a Imperial Agent focusing on Aim instead of Cunning for example. For now this list seems to be fairly accepting of most play styles though and gives you a good idea of what is considered normal.

Notice a trend here? Bounty Hunter = Trooper, Sith Warrior = Jedi Knight and etc. What you are seeing is the balancing mirror effect, with what Bioware has chosen to try to balance the classes from one faction to another. It seems they have chosen to have certain classes mirror each other in an attempt to make combat as fair as possible between the Imperial to the Republic factions.

Sinking specialization into those main stats above is most effective until you break into the higher levels and you start to see gear with bonuses to other abilities like “surge” for example. At this time those are the abilities I like to think of as your secondary stats. 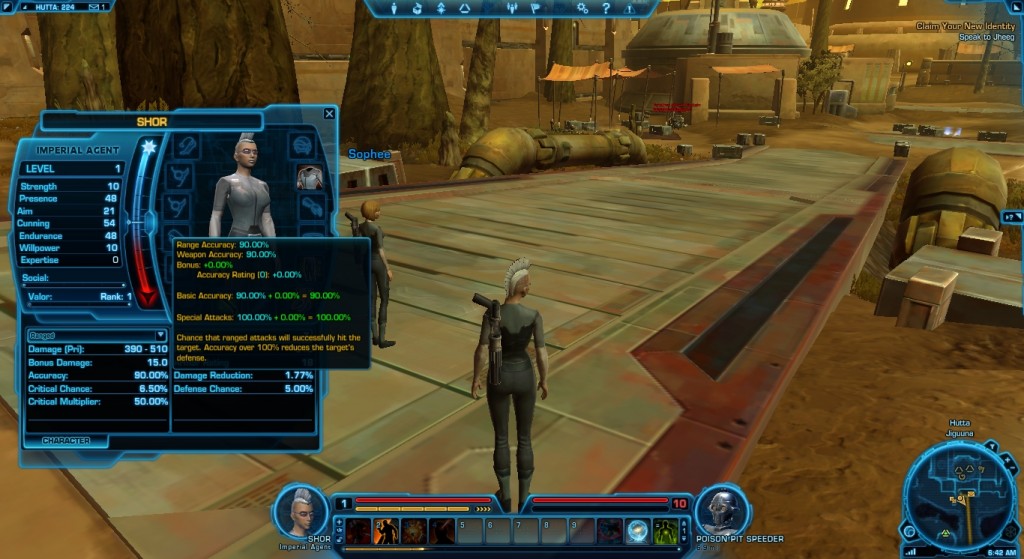 Absorption– increases the amount of damage shields absorb.
Accuracy– increases your chance to hit the target you are fighting with, and increases your chance to penetrate defenses. For classes that consider this a secondary, 100% or better accuracy is very effective.
Alacrity– speeds activation and channel times. affects certain cool down times
Armor– reduces incoming physical and energy damage from kinetic and energy attacks
Critical Chance/ Critical Multiplier– increases your chance to crit and the damage you do when you crit.
Damage (primary)– increases your main characters damage output. It is a percentage applied as pure raw damage before modifiers and then all critical bonuses are applied afterwards
Defense– increases your chance to avoid incoming attacks.
Expertise– Controls things to do with PVP, it is not only a defensive modifier but an offensive as well for all stats having to do with PVP. Think “Resilience” in WOW.
Force Power/Tech Power– increases damage of the specific type only. Force bonuses for force users and tech bonuses for users of any item considered a “tech” item.
Presence– enhances how well your companion functions with various tasks. Things noted so far; how much damage they do, how powerful their healing abilities are and there are more areas having to do with companions this affects.
Surge– increases the power of your critical strikes

One thing after looking at a list like that and the way those stats are laid out it is apparent that there will be differing PVE vrs PVP builds that will be optimal. Keep that in mind when thinking on the suggestions next as far as what secondary skills might fit a traditional cookie cutter build for the advanced class choices. Notice again we see a mirroring effect.

Trooper– primary statistic is Aim for secondary choose something like:
AC Vanguard- endurance and defense
AC Commando- critical and surge

There will always be ingenious players that come up with very clever builds using skills and gear combos that make you scratch your head but that work for a targeted effect in both PVP and PVE. These suggestions I have listed above are geared towards the New to Moderate level of MMO gamer experience levels. They are suggestions designed to get you to the point where you can fill archetypal roles like “Tanking” “Healer” “Deeps”.

Please be sure to leave any comments or questions you have about this guide I welcome all discussion, I hope this has helped you understand your stats in SWTOR better!

Follow me on twitter for notification of new General Gameplay and Crew Skills Guides being posted and also for news about updates to these guides.

40 Responses to Character Statistics In SWTOR And What They Mean