In order to enter Kuat Drive Yards as level 55, proceed toward the Mission Departures Elevator in Main Fleet. Choose Starfighter floor. Before proceeding toward the flashpoint, be sure to grab the main quest REP “The Secret War“, EMP “The Ranken Initiative” that rewards: Credits, Purple Reputation Trophy (large amount of reputation points), Planetary Commendations, Primeval Artifact Storage Case( Class 10 Lockbox, can contain item modifications, ) at the same floor. All players level 15-55 can grab this quest.

There is a total number of 5 random scenarios that players can experience inside this flashpoint. These scenarios are completely solo-able and reward a decent amount of legacy points. You’ll come across rare mobs inside the flashpoint. These mobs usually drop Green and Blue reputation trophies for Republic First Fleet and Imperial Forward Command reputations. Rare mobs also drop KDY Construction Kit, which are used as resource for new reputations Republic First Fleet and Imperial Forward Command. 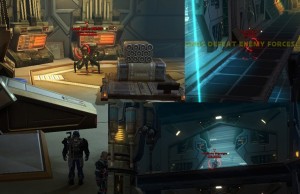 There are also two types of bonus quests. The first type is specifically tide to a scenario you are currently completing, while the “Sabouteur” (Destroy 20 Enemy Supply Drops) spreads over two scenarios. 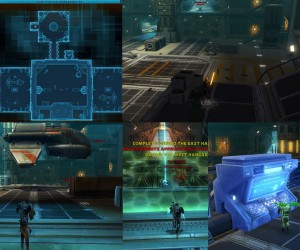 Hangar Bay Scenario can be easily completed. It consists of defending hangar from waves of enemies. When you enter the hangar, the enemies will spawn. You should proceed toward those groups and clear them out. Scenario ends when you defeat Enemy Command Team and secure the Hangar.

This area is great for scouting the rare mobs. When you enter the Hangar you can quickly check out all the mobs inside. 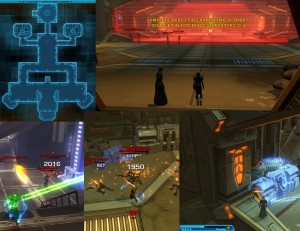 Cannon Emplacement is rather long scenario, which consists of disabling two force field generators and disabling the cannons after disabling three Control Consoles. 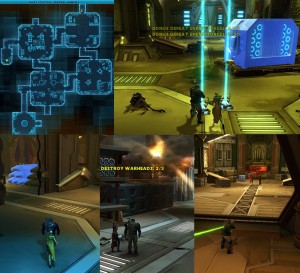 This scenario requires a little bit more work than the previous ones. It consists of destroying 3 Munitions Stockpiles, Warheads, Bombs and Rockets, Missile Stockpiles and a Station Guardian Prototype.

Starship Assembly scenario has very interesting story. In order to complete it, you need to grab three Access Codes. Electronics, Propulsion and Weapons Assembler Access Codes can be found in the following rooms: in the Central room on the table, and in two rooms at the sides of the Central room. At the end of the scenario, you should assemble the Ship Prototype and watch it burn… 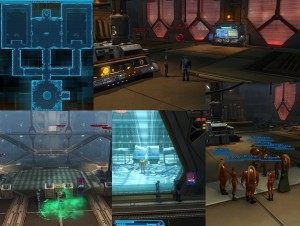 Holding Cells Scenario is pretty interesting scenario if you follow “light alignment”, as the goal is to access the cells and free the prisoners. In order to receive this objective you need to destroy two Security Power Panels in the central room. This action allows you to deactivate Primary Control Console and open the path toward two cell blocks.

There are five Bosses you can encounter at the end of Kuat Drive Yards Flashpoint. They are extremely hard to be defeated solo, but this job is not impossible. They can be easily defeated with a 2-man group. After defeating them, you will be rewarded with two blue reputation trophies. The first one comes as a drop from a boss, while the other one is a reward for completing the flashpoint.

While defeating Major Benes or Lieutenant Krupp you should be aware of some of abilities:

You have to move constantly while fighting this boss. You should be aware of the following abilities:

One of the bosses that requires a lot of work. The following spells should be avoided or interrupted: 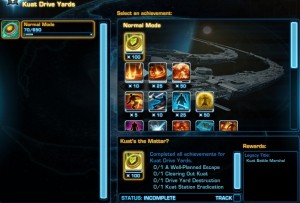