loading
Rakghoul Plague Outbreak Event brings new daily area, reputation faction with additional things like codices and legacy points. This is not level 55 event, all players above level 20 can participate. Rakghoul Plague Outbreak event is placed on Alderaan planet, and players can participate from January 21 – 28, 2014 (begins and ends at 2AM PST/ 10AM). This is a recurring event and it may occur on different planet when it starts again.

Things you should know or you know already:

These items are drops from the following creatures:

Lair of the Eyeless

Main event takes place in three zone maps inside the Rakghoul Tunnel. Their names are Contagion Zone, Inrested Pathways and the heroic zone The Epicenter.

How, where to start? 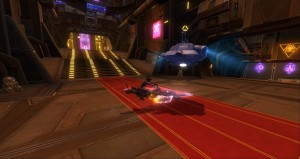 On the main fleet look for news station broadcast bots – News Terminals. They are placed on North, East, South and West side of the main fleet station. After a small cut-scene, quest [REP] “To Fight Infection” and [EMP] “Combating the Plague” will start. It’s an introduction mission that leads you to the source of plague, Alderaan, more accurately Rakghoul Tunnels on Alderaan. When you reach the first NPC in the mission, you will find a speeder next to NPC. Use it to reach the Spike in King’s Pass. Once inside the Spike, use the nearby elevator to reach the Rakghoul Tunnels, where you can find additional missions. Mission Terminal offers 5 daily missions.

There is a small datapad behind [REP] NPC Tralie Masoon in The Apalis Coast and [EMP] NPC Doctor Ressel in Kaamos Teritory. When you get close to the Mission Terminal in the first Rakghoul Tunnel zone map, you can find a datapad. This small datapad starts this quest. In order to complete the quest you should find nearby Infected Citizens and threat them with the given quest item. In order to spot them easily you should turn on nameplates on friendly NPCs. You have to get really close to the infected patients, in order to use the quest item. You can’t use the quest item while on speeder. 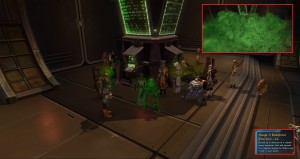 Upon completing quests in Rakghoul Tunnels, creatures may infect you with Rakghoul Plague. This plague has three debuff stages. The first and the second stage last 10 minutes. When the third stage begins, your character will blow up, inflicting nearby targets who are not not infected/vaccinated. This is the second way to obtain plague.
You should protect yourself from Rakghoul Plague debuff, since it periodically disables you while completing quests. Use Rakghoul Vaccine, available at any Medical Droid for 2 000 Credits.

This mission should be the last one in your progress list as it requires you to pick up three small Alderaan Raklings from eggs, looking for Fungal Flora and bring them to the Specimen Container near mission terminal. 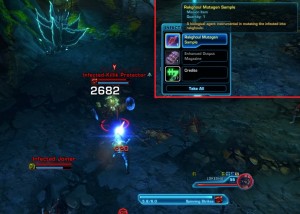 Creatures you kill in the first zone map, drops Rakghoul Mutagen Sample. You have to collect 10 Samples.

REP [DAILY] A Grim Examination / EMP [DAILY] All That Remains 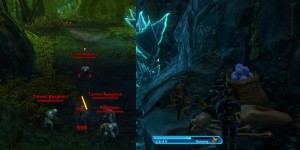 A Grim Examinations / All That Remains

This mission takes place in the second zone map – Infested Pathways. The place is full with Rakghouls, and skeletal remains are scattered around the place. you need to scan

This mission requires using a macro binoculars quest item. Use them for scanning the navigation beacons at the marked map locations. Beacons are attached to the Rakghoul Tunnel ceiling.

Interact with Fungal Growth, located on the ground in the third zone map – The Epicenter. This action will result in spawning 352 000 Hp, Champion mob called Rakghoul Blight. Try to interrupt his abilities, especially the range one. 20 Fungal Rakghouls will attack you as a group, upon making hostile moves toward the level 25 Fungal Rakghoul Forages in the area. 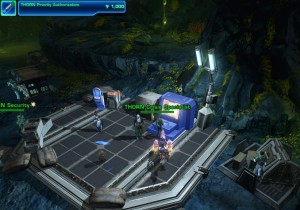 The Rakghoul Infection / Heart of Infection

Note: There is a T.H.O.R.N. Outsider Ranking prerequisite item called THORN Priority Authorization, which can be bought from the T.H.O.R.N reputation vendors for 1 000 credits. Upon using this item, interact with holoterminal near the Rakghoul Tunnel Mission Terminal in order to receive this quest. 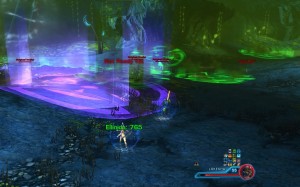 The Eyeless is pretty easy, strait forward boss. When he drops damage circles, just move away or you will be knockback and take a huge amount of damage. The green ranged AOE circle – Infected Phlegm makes stacking debuff , while the purple one – Crush makes a huge damage. Another attack – Pound, does pretty large amount of damage to the tank. There are also a couple of adds that spawn during the fight.

There are two reputation vendors in the first tunnel zone map. When the event is completed, you can still purchase and see the rewards, but this time you need to travel to Nar Shaddaa, Upper Promenade (near GSI Reputation Vendor). One of reputation vendors is selling companion customization stuff, while the other sells the rest. They both sell THORN Priority Authorization (Outside Standing), item that starts the [OPS] The Rakghoul Nightmare mission. T.H.O.R.N.

As you can find this NPC Jeelvic only in Rakghoul Tunnel, thus, better be quick in acquiring items. He also requires T.H.O.R.N. reputation standings for some of the items.

Hey, I’m A Fungi is an achievement that requires you to kill 5 different mobs in the Rakghoul Tunnels (5 times) and The Catalyst (once). Four of these mobs can be found in the Inrested Pathways, while the last one can be found in The Epicenter. Catalyst is OPS mob. Entrance to this area is in Southeastern Inrested Pathwways.

There is an hidden achievement for killing 1 000 players with the rakghoul plague.

Source: Reddit- user enderandrew42, post Where to find all the Rakghoul event pets There are 11 pets that you need to acquire in order to be able to complete all of the achievements of this section. Their names and locations are listed below: