loading
Out of nowhere Bioware started a special Rakghoul Pandemic Event on the planet Tatooine. The event consists of several [DAILY] quests as well as new World bosses and some puzzle quest chains that will reward you with a mini rakghoul pet. You can also earn DNA samples that will help you buy color crystals and random companions customization from the special event vendor. In this guide we’ll cover the most interesting parts of the event with explanations on where things are located and how to get them.

Before you do any of the Area Daily quests or do any of the Heroic World Bosses you want to visit one of the Medical droids on Tatooine and buy a Rakghoul Vaccine. This will protect you for 4+ hours (or until your death) from the Rakghoul disease and without it you will die in a green explosion of goo. It takes about 40 minutes from the beginning of the infection for you to explode into green goo (the result of not getting vaccinated).

Rakghoul Pandemic: 5 – Origins of the Outbreak

There are several Codex entries connected to this event (you can find them all in our Codex database section: Events). One in particular is very interesting, because it is part of seemingly random steps that reward you with a nice little mini-pet Crimson Rakling. Inside the starting town on Tattoine you need to find and use three objects: TV at the starport exit, an escape pod somewhere in town and a medical crate somewhere in town. Once you find these objects you go to the Anchordhead/Mos Ila taxi and next to the taxi station you will be able to pick up the quest “Tracking the Origin“. You than need to find 12 pieces of wreckage scattered around Tatooine. Once you do this you will get the codex entry, but you need one more step to finish the quest and get the mini-pet and that is to pick up a crate clearly marked on your Tatooine map. You can find a full guide with all the coordinates and screenshots for both Empire and Empire on our codex page: 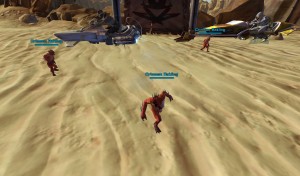 Location: Tatooine, Dune Sea
Coordinates: He is summoned from a control panel located at: -1258, -2098 (next to the Sarlacc pit)
HP: 1518505
Codex gained: Rakghoul Pandemic: Defeated Zama Brak
Tactics: The boss was doable with 8-10 level 50 PUG. He kicks the main tank from time to time high up ion the air. If I remember correctly though, there is no fall damage. He also spawns these black ponds on the ground that do high damage to anyone standing in them, so your raid needs to move constantly. Otherwise he is pretty straightforward.

Use this panel to summon Zama Brak

Boss jumps out of the Sarlacc pit

Location: Tattoine, Outlaw’s Den
Coordinates: -29, -981
HP: 1275545
Codex Gained: Rakghoul Pandemic: Defeated Urtagh
Tactics: You might want to watch out for the Champion adds he spawns from time to time, but they were not a big challenge for our very big group. For a smaller ops group you might want to have dedicated healer and off-tanks/dps to deal with adds because there are 3-4 spawning several times during the fight.

Coordinates of Urtagh’s location in the Den

Location: Tattoine, Dune Sea
Coordinates: -1770, -870
HP: 588105
Codex Gained: Rakghoul Pandemic: Defeated Infected Trapjaw
Tactics: Infected Trapjaw is a level 30 Heroic Boss, just like his non-infected counterpart Trapjaw. If you are with the same group you killed Zama Brak and Urgath with you shouldn’t have any trouble. I even suspect a well geared lvl 50 could solo it.

Coordinates of the skull you use to summon Infected Trapjaw

Local map of the summoning skull

There are several quests that activate as you approach the crash site of the Stardream, a republic ship that brought the Rakghoul plague to Tatooine. You get tasked with searching the wreckage for several clues and killing a bunch of Rakghouls in the meantime. As reward you will get the remaining Codex entries for this Event as well as DNA samples. These samples are used as currency for purchasing stuff from a special vendor located in the Dune Sea. Among the things you can buy are Color crystals of various quality and the Rakghoul mini-pet, but you can also get a random companion customization crate. Among the more fun dailies is the one that tasks you with getting the Rakghoul disease (just fight any infected mob without the Vaccine) and than spreding the disease to others. You spread the disease to others by going to a nearby quest hub and exploding when the disease runs its course. The act of explosion will infect others and reward you with DNA samples to spend at the vendor.

Local map of the daily area quests at the Stardream wreckage

Reward you get for finishing one of the dailies

Location of where you get additional Area Daily Event Quests