loading
Galactic Starfighter is the second SWTOR digital expansion. This expansion don’t bring new planet, but it improves one important part of the game – Space Battles!

How, where to start ? 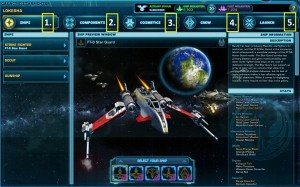 Galactic Starfighter menu consists of 5 tabs, where you can use different resources to unlock some features. In the list below, we specify the resources required for each tab: 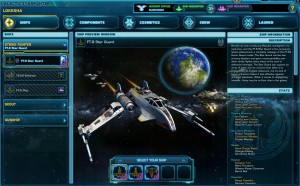 The first tab allows you to choose a ship you want to use in a battle, or to purchase and modify ships. At the start, you can choose between 3 types of ships Strike Fighter, Scout, and Gunship. Strike Fighter and Scout class have two locked ships which can be used after purchasing them with cartel coins in Cartel Market, or after collecting enough Fleet Requisition. At the bottom of Galactic Starfighter HUD you can notice 5 slots where you can place 5 different ships, and switch between them while you navigate through other tabs.

Strike Fighters are ships that can be defined as combination of Scouts and Gunships. Their medium range combat style and large number of weapons for a battle, make them the best choice for people who don’t like close or long range combat.

Scouts are extremely agile ships with the fastest engines. These ships are best for close combat, hiding between rocks, or loosing escort in tight places. Their main disadvantage is lack of weapons’ choices since they don’t have any missiles or double primary or secondary weapons.

Gunship is the only ship which can use railgun – long range weapon that does devastating damage. This ship is best for long range combat.
Disadvantages: Slow ship and vulnerable during a close combat attack. 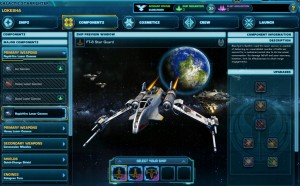 Components are upgrades that make your ship distinct from other ships. They are split into two groups: Major and Minor Components.

Major Components are: Primary Weapons (Short-Medium Range weapon Cannons), Secondary Weapons (Medium-Long range weapons like Pods, Missiles, Probes, Railgun), Shield and Engines. All ships have these components, while, component Systems (short term buffs) are specific component for Scouts, since they don’t have second primary or secondary weapons. Major Components are responsible for your ship active skills in combat. Double Primary/Secondary weapons or Systems (Scout) are the first skill in the mini bar, while shields and Engines take the second and the third places. 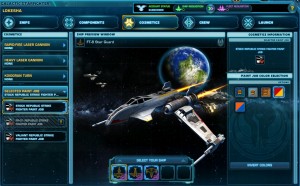 This tab allows you to customize colors of almost every part of your ship, including weapons fire. Cost range goes from 120 up to 480 Cartel Coins. 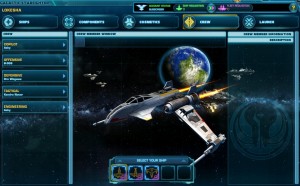 This is another type of upgrade components. You can take into the battle 4 different crew members. Each member has 2 passive and 1 active ability. Crew members can be picked from 4 different crew area of assignments: Offensive, Defensive, Tactical and Engineering. Each crew member boosts ship with 2 passive abilities. When you mark one of them, it becomes your copilot and its active ability is placed as the fourth skill in your mini bar during the PvP match. 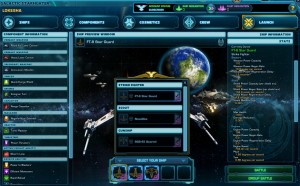 The last tab offers you the place where you can finalize which ship will be used during the combat, as well as choosing the option whether you’ll enter the battle solo or with your friends as part of a group queue. You can choose up to 5 ships that can be used during the combat, and switch between them in any order you like. If you have more than 5 ships, use the Select Your Ship button right above the ship icons on the mini bar. At the start of every match, or if you die during the combat, you can switch between selected ships, and choose the best one for the battle. When you press the launch button, the marked ship will receive Ship Requisitions at the end of the match, and other ships no matter if you switch to them at the start of match or during the match are not going to be awarded with Fleet Requisitions.

Galactic Starfighter prizes, commendations, where to earn them, spend and etc.

Fleet Requisitions are used for unlocking ships and crew members.

Where I can find out more about combat?

There is a question mark icon above Launch tab in Galactic Starfighter main tab. Press it and game will guide you through the starfighter combat system. Be sure to check out two major tutorials as they give all important information. In order to see them be sure to have option Show Tutorial Alerts checked in User Interface tab of your game menu. 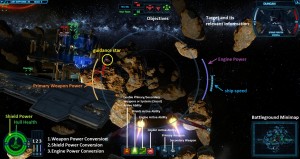 The first thing that you should use to is the 3rd dimension. So far, our game style was based on tracking enemies that move right or left, but this time you are faced with new task which requires from you to take in calculation new factor – 3rd dimension. In that manner tracking an enemy is the most important thing. You can accomplish this easily if you pay attention on a couple of things. You can notice enemies’ movement on a minimap. When you approach an enemy, use a key bindings like “Tab” to cycle between nearest enemies, and “R” to target last enemy. After marking an enemy, you can track his movement easily, as a half filled red parallelogram on a minimap, even if he tries to run away from you.