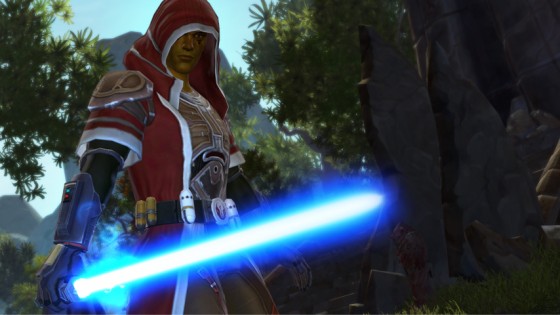 Danger lurks in the shadows of the Republic and the Empire: fanatical infiltrators hidden in the ranks of both governments and militaries, all dedicated to the cause of a man long thought dead. He has been both Jedi and Sith, both conqueror and savior. He is Revan—and he will stop at nothing to complete the galaxy-changing mission he began more than three hundred years ago…

All classes can now reach Level 60!

New Location: Rishi! A dangerous pirate haven at the edge of the galaxy!

New Flashpoints! Ruthless Mandalorians and an army of fanatical Revanites stand between the Players and their ultimate goal in two new Flashpoints for levels 56-60!

New Operations! Take on the galaxy’s most savage pirates, then face Revan’s most dedicated protectors in two new level 60 operations, providing the ultimate challenge for groups of 8 or 16 players!

New Feature: Disciplines! Disciplines is a major overhaul to the class system. At its very core, the Disciplines System replaces the current Skill Tree system while offering a wider array of impactful Utility choices to expand their character and the ability for a character’s identity to surface much earlier in the level path. The Disciplines System changes the way we think about and develop the classes themselves, which translates into a more balanced game and the capacity to expand levels and abilities more often. We’re excited about this system and the possibilities it unlocks for the future.

For a full description of what Disciplines is, please see our Dev Blog.

While on the Mission “Prelude to Shadow of Revan,” players also have access to the Solo Modes of the Forged Alliances Flashpoints when the chain calls for them to be completed.

New GUI Element: Effect Procs! A new visualization system called Effect Procs is now live! This system plays an eye-catching visual effect around hotbar buttons when the ability in that button has been “powered up” by another effect.

Ranked Arena Season 3 has come to a conclusion! Congratulations to all the reward winners! In preparation for Season 4, Ranked stats have been reset and the Leaderboard for Season 2 has been archived.

Introduction + Synopsis While the Disciplines System is the major cornerstone of the changes coming to Classes and Combat (for more on the Discipline system, see our Dev Blog), we have also made adjustments outside of Disciplines that change combat on a global scale:

Combat Change Philosophy Leading up to 3.0, we knew we wanted to make changes to how we handled customization and choice, as we felt like the tree-based Skill System lead to many problems, including the loss of class identity, uneven power gains, and overly complex rotations. While we wanted to maintain the feeling of progression and gain that this system provided during the leveling process, we wanted to move past the tree-based system. This lead to the introduction of Disciplines, which you can read all about here. Given this chance to reimagine how combat and classes work in The Old Republic, there were also some changes we wanted to make on a more global scale in order to address some concerns and feedback.

In a similar fashion, we weren’t happy with how long it took to level from 1 to 55 in the pre-3.0 game. In order to speed up the low-level game, all enemies from level 50 and lower are no longer as tough, and now die faster.


Operation-Wide Abilities With the release of Game Update 3.0, Operation-wide abilities have been given to every Advanced Class. This change was made in order to address the idea that you had to have a Sentinel/Marauder in your Operations group in order to be at the best that you could be. These new abilities stack with each other, but not with themselves, and include defensive and offensive abilities. These abilities also ensure that any Operation group composition is well equipped to tackle what’s ahead of them, even if they don’t have a specific class available.


DoTs, Interrupts, and Channels In order to make Damage-over-Time Disciplines more viable in Warzones and Warzone Arenas, player DoTs can no longer be cleansed. They can, however, be purged by self-targeted abilities such as Force Shroud/Resilience. DoTs inflicted by Enemy NPCs can still be both cleansed and purged. In order to make cleansing abilities more viable after losing a major component of its functionality, cleanses can now be used to remove Crowd Control (CC) abilities, such as stuns and roots.

Interrupts now have a longer cooldown, as we want players making informed, tactical choices when choosing what to interrupt instead of indiscriminately interrupting everything possible.

Channeled abilities now cost resources at the intervals when damage or healing would be dealt, instead of costing the full amount at activation. This is mostly a quality of life change, as players would spend a large chunk of resources and get interrupted, pushed backed, stunned, etc. and lose those resources. Additionally, channeled abilities can no longer be pushed back. They can, however, still be interrupted with interrupting abilities and stuns.


Stat Changes Accuracy skills have been removed from the game, and Accuracy is now a gearing consideration only. Additionally, Accuracy Rating now gives more Accuracy per point. Tank Classes now gain 10% Accuracy for being in the appropriate “Tank Stance,” but lose some damage. This change was made in response to their being no counter-play to Taunts in PvP – it was simply a damage reduction with no recourse for those afflicted by it.

Alacrity now speeds up ability activation, speeds up global cooldowns, resource regeneration, Duration of DoTs (DoTs deal the same amount of damage, but faster), and reduces internal cooldowns. This change was to make Alacrity more useful as it now always makes you faster, and eliminates situations where Alacrity could actually be disruptive to your rotation or resources.

Bolster Augments now interact with the Bolster system. Like other slots, Players with low level (or no) Augments will be given some stat compensation to bring them up to a more competitive level. Higher rating Augments still have an advantage over these Augment slots.


Due to Augments now being handled inside the Bolster system, the power gap between the Bolstered level of stats and the high end PvP gear (disregarding any Augments attached) has been increased slightly. The “worst case” to “best case” power gap remains the same.

Jedi Knight/Sith Warrior Jedi Knights and Sith Warriors will notice that Riposte/Retaliation is now specific to the Guardian and Juggernaut Advanced Classes instead of being an ability that all Knights and Warriors get. This change was made due to Sentinel and Marauder Disciplines not supporting the effective use of Riposte and, barring fringe cases, Riposte was a poor use of Focus/Rage. Guardians and Juggernauts will find that the new Riposte is part of the Global Cooldown, deals more damage and consumes less Focus/Rage than Slash/Vicious Slash. Sentinels and Marauders will also notice that Crippling Throw/Deadly Throw has been removed, but the healing received debuff it applied has been added to Crippling Slash. For further changes, see below:

Sentinel and Marauder Guardian and Juggernaut


Jedi Consular/Sith Inquisitor The most substantial Base Class change for Jedi Consulars and Sith Inquisitors is that Force Potency/Recklessness now affected numerous channeled abilities instead of just one. Sages and Sorcerers will find that a few abilities that used to go to all Shadows and Sages have been moved into specific Disciplines, but Rejuvenation/Resurgence is now available to all. Shadows and Assassins have received a few quality of life improvements, such as Force Cloak no longer inhibiting healing while active. Additionally, Whirling Blow/Lacerate has been adjusted in order to make it more viable in a rotation. For further changes, see below:

Shadow and Assassin Sage and Sorcerer


Smuggler/Imperial Agent The Smuggler and Imperial Agent Base Classes have been refined, and a few abilities have been moved out of the Base Class and into appropriate Disciplines. Gunslingers and Snipers will likely first notice that being in cover is no longer a requirement for many of the abilities that previously required it, but also that being in cover is advantageous. Scoundrels and Operatives will find that they have more survivability with the inclusion of an instant activation heal and gaining Scamper/Exfiltrate earlier in the game. For further changes, see below:

Scoundrel and Operative Gunslinger and Sniper


Trooper/Bounty Hunter Troopers and Bounty Hunters will find that their resource costs have been adjusted in order to make resources more manageable, and that the order that abilities are received has been streamlined to allow for easier leveling and earlier access to tanking and healing abilities, depending on Discipline. Additionally, Diversion/Chaff Flare is now just for Commandos/Mercenaries, while Vanguards/Powertechs can reduce their threat with Sonic Round/Missile while Ion Cell/Gas Cylinder is not active, but it continues to be an area taunt while Ion Cell/Gas Cylinder is active. For further changes, see below:

Commando and Mercenary Vanguard and Powertech